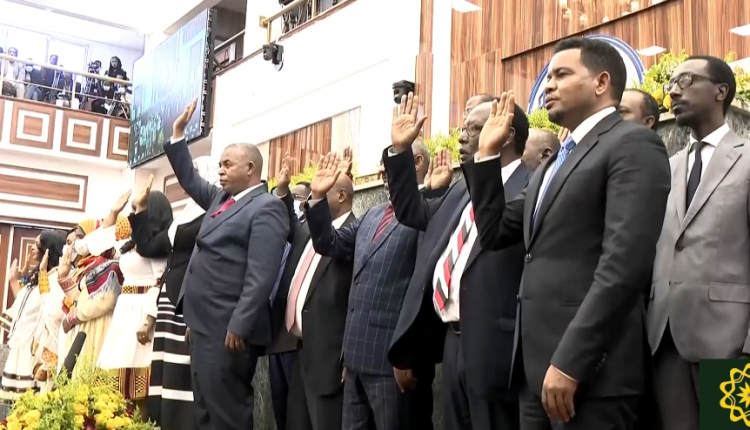 “Abiy, who was sworn in for his first full five-year term on Monday after his party won a landslide victory in a June election, also tapped a new head [Binalf Andualem] for the peace ministry.

The cabinet was approved on Wednesday by a majority vote in the lower house of parliament, with two votes against and 12 abstentions.”

BBC English also reported that “Three ministerial positions have gone to figures from opposition parties. Berhanu Nega – the leader of the Ethiopian Citizens for Social Justice Party, which won a few seats in the election – has been appointed minister of education.

“He once founded an outlawed rebel group, and first rose to prominence in controversial and bloody elections in 2005 when his then party won an unprecedented high number of seats.

“Belete Molla – the head of the National Movement of the Amhara- has been appointed minister of innovation and technology.

“Kejela Merdasa – from the once-banned Oromo Liberation Front (OLF) – has been given the post of minister of culture and sport.”

Reuters noted in its report that ‘”Even though we have differences, we should adopt a culture of working together,” Abiy told parliament. “Including others and working with them will help political parties form a foundation for the future.”’

Xinhua English, DW English, africanews, and other foreign media outlets have also reported on the event.