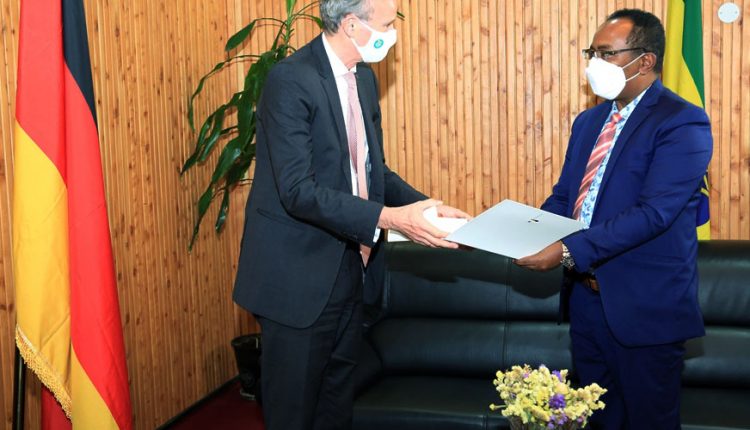 The ambassador said this when he handed over a copy of his credentials to State Minister of Foreign Affairs, ambassador Redwan Hussien today.

On the occasion, ambassador Redwan appreciated and thanked the German Government for its commitment to supporting the on-going economic and political reform in Ethiopia.

He also commended the unceasing support Germany extends to Ethiopia in fighting the COVID-19 pandemic, according to the Ministry of Foreign Affairs.

He also took the opportunity to explain how the building of the Grand Ethiopian Renaissance Dam benefits downstream states and help neighboring countries build a vibrant and integrated economy.

Appreciating the on-going political and economic reforms in Ethiopia, ambassador Auer suggested that Ethiopia would benefit a lot if it invites small and medium scale manufacturing companies in Germany to invest in the Ethiopian market.

Regarding the GERD, the ambassador reiterated that his country is very much in favor of dialogue to come up with mutually beneficial outcomes among the three parties.