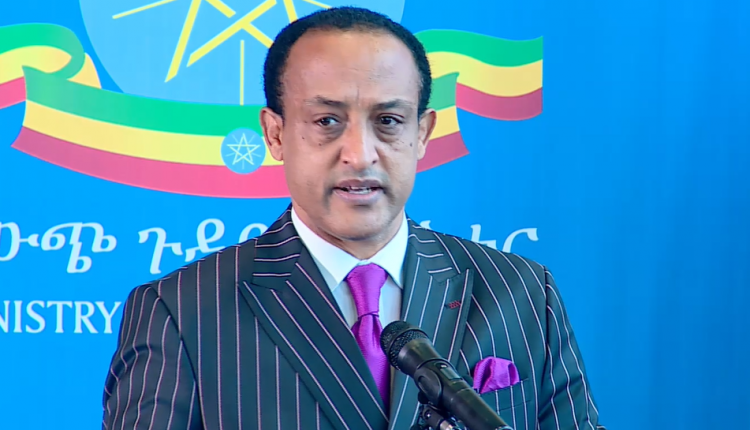 Addis Ababa, August 11, 2022 (FBC) – Ethiopia will not accept any parallel effort that replaces the African Union (AU) in the peace process to end the conflict in the northern part of the country, according to the Ministry of Foreign Affairs.

“The government’s position is to continue the peace effort initiated by the African Union. Any other similar effort is totally unacceptable,” he underscored.

The spokesperson stated that Ethiopia also encourages the former Nigerian President and High Representative of the Chairperson of the African Union Commission for the Horn, Olusegun Obasanjo, to reinforce his effort as a facilitator of the peace process.

However, the government will not refuse imminent personalities from the Africa continent to support the process, if it is necessary,  Meles pointed out.

The information ascribed to the commission claimed that the African Union Political Affairs, Peace and Security has reached an agreement to accommodate the UN, EU and USA to be part of the AU’s team designated to broker peace between the federal government of Ethiopia and the Tigray People’s Liberation Front (TPLF).

But the government has learned from officials of the commission that the statement is false and it was not released from the Union, according to ENA.

“People in the African Union confirmed to us that the information said to have been leaked did not originate from them at all. They stated that the document has no legitimacy and is a fake document. They also said the statement is part of a normal social media disinformation activity and campaign,” the commission revealed.

As part of this disinformation campaign, there has been a wrong perception “regarding the international community’s role. There are media reports presenting the role of the African Union as equal and even replacing it,” he elaborated.

According to Meles, “the international community is encouraged to provide financial, technical and logistical support for this peace alternative endeavor. But it cannot replace the role of the African Union, which is the solepeace-broker.”

He also reiterated the government’s confidence building measures such as the disclosure of peace alternative committee under the leadership of Demeke Mekonnen, Deputy Prime Minister and Minister of Foreign Affairs, as well as its readiness to talk anytime and anywhere without preconditions.

This endeavor alongside the determination to work together with the African Union as facilitator has proved the government’s commitment to peace; and that it has no intention of entering into another war, the spokesperson pointed out.

On the contrary, the TPLF group is not committed to peace and has been making preparations to wage war. Moreover, the TPLF has continued to set preconditions for the peace process to start.

Speaking about resumption of basic services in Tigray region as well as conflict affected areas of Amhara and Afar regions, he said the government will not put or accept preconditions for the peace process to start.

The position of the government is that assessment should be done on security, safety and regulation to start basic services.