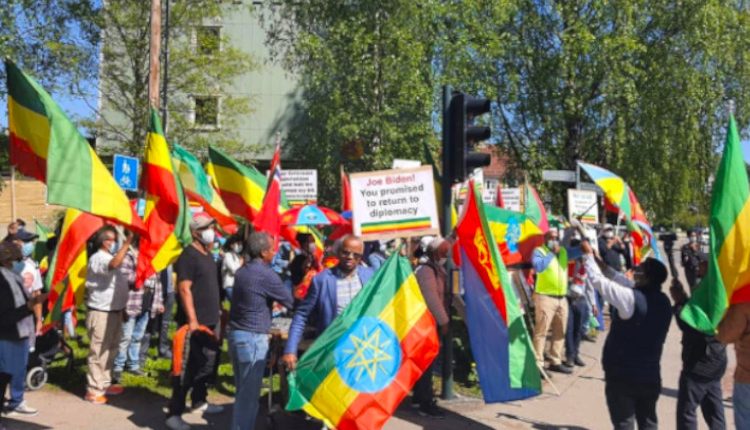 The dictum has it that every disadvantage has a kind of advantage for potential victims to extract, just the way Ethiopians have done  from the visa restrictions which the US imposed against Ethiopia, daring to dictate us what to eat for breakfast and when to sneeze. Fortunately, the sanction has not only helped us unite, but also enlightened us to suspect and cautiously behave as we communicate with the US, sensing the kind of potential threat being plotted by foreigners.

It’s well-chronicled that it’s the wisdom of Ethiopians to unite when their aura alert them that a real threat is out there in its hideouts waiting for the right time to dismantle the state and its people, exactly the same way our forefathers did it as colonialist came to scramble Ethiopia thinking it was the right time to act against it.

The rally ,which the nation staged to  denounce the desire of the US to throw its hands in the domestic affairs of Ethiopia, has proven to me the  never fading and ever fresh wisdom of Ethiopians  to act in unison as enemies salivate to attack, tricked by minor differences of Ethiopians.

Right! As if metaphysically privileged to sense how grave  a certain  plot is, nobody has forced us to act  against the biased  moves of the US, rather ,it’s strange ,irrational and unfair statement has enlighten us all young and old, literate and illiterate, Ethiopians here at home and abroad  to take streets with patriotic mood  harmonized by epics all saluting our forefathers took me down to history in flesh back, kinds of chemistry Ethiopians are composed of and the never fading patriotic wisdom which we have inherited form ancestors.

The rally in particular, and of course the strong bondage Ethiopians made all of a sudden as some foreign powers have dared to intervene in our domestic affairs has reminded us of the kind of magnetic fields which nature has  privileged  us  to unite when a  potential  danger is out there to risk our sovereignty.

Must be clear that nobody is sadist to enjoy human sufferings of all, manmade or natural. But the truth is no human sufferings have ever caused foreign powers to genuinely act, hidden motives of self-interests rather have prompted them despite they are trying to boast of their tricks.

But what has caused the sufferings? Its TPLF which made Ethiopia to act after it massacred its unsuspecting troops, despite many lost the appetite to denounce such a barbaric act of our time today. US too has claimed many innocent lives as it acted in any confrontation of self-defense, but nobody has accused it of any wrong doings for it is a super power. It has never excused any of its enemies which have attacked its interests, let alone threatening its sovereignty.

Same is not true for Ethiopia, a country which the US has accused of simply because it acted to save the nation from traitors. It then regrettably has cursed us in front of the world referring to piles of reports which lobbyists of TPLF fabricated, with no even a slight interest to cross check the reality on the ground.

The sanction has made many to doubt the credibility of the US, making some even from within the senators of US to strongly oppose, though, the sanction angered us not because Ethiopian officials are banned from getting visa, and of course criminals should be accountable, but its plot to instill TPLF back to power is very dangerous, and it’s an insult to Ethiopians, even some remnants TPLF too mocked the move, saying it has nothing to do with the victims, rather is a sanction which is imposed to defend its own interest, and the interest of its allies. Who to benefit then?

The US is not yet satisfied, and has threatened further sanctions if Ethiopians refuse to obey its warnings, perhaps better to say if Ethiopia sneezes without having a go ahead from the US. Its tone sounds like the US is daring to dictate Ethiopia what and when to eat citing the alleged human rights violation Ethiopia committed as Ethiopia tried to save the country from dangers imposed by TPLF. Nobody enjoys the pains of fellow Ethiopians, but what about the massacre TPLF committed against our troops in its greedy attempt to make a comeback to power, after it mocked all the diplomatic approaches the federal government offered to it?

Now, after Ethiopia has narrowly but patriotically spared it from TPLF juntas, some foreign powers have shamelessly come out with fake, ungrounded and fabricated information which are authored by TPLF lobbyists. And almost none of them have gone for further cross checks; rather have been behaving against law, profession and human morale.

I doubt if the US is genuine to its ties with Ethiopia and even with the rest of humanity, and I’m puzzled of gains it could earn at the expense of ruining its old and fruitful ties with Ethiopia. I don’t think it is only because of the fake information US is being fed by the TPLF that it has appeared against Ethiopia, perhaps to profit at the expense of Ethiopia and Ethiopians .

The decision costs both Ethiopia and US and even the horn, if not the globe. We may be wrong, but we Ethiopians do not have the moral courage to earn a visa at the expense of our pride. Poverty hurts, we know, but what’s more painful is being humiliated for being poor. Surrendering one’s nation for the sake of filling one belly is equivalent to emptying history, identity and pride. If you think Ethiopia has nothing to offer you in return to what you are doing to it, leave us alone, don’t want to dictate us what to eat and when to sneeze.

Hats off to friends of justice!

Residents in TPLF occupied areas of N. Wollo in catastrophic…

A warm welcome to Samantha Power to Ethiopia, and a word of…

‘Stop Interfering’: Ethiopia’s Opportunity After The…