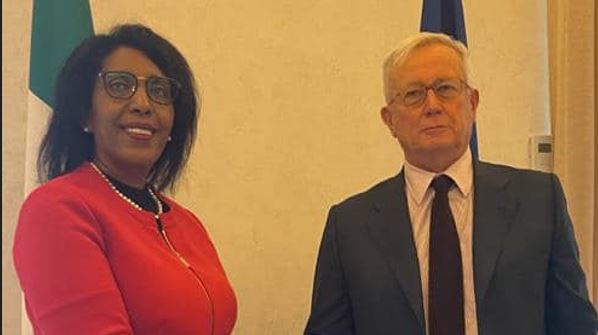 Addis Ababa, December 3, 2022 (FBC) – Ethiopian Ambassador to Italy, Demitu Hambisa held a meeting with Giulio Tremonti, Chairperson of the Committee on Foreign and EU Community Affairs of the Chamber of Deputies of the Italian Parliament.

Ambassador Demitu and MP Giulio Tremonti exchanged views on issues of common interest in the bilateral relations between Ethiopia and Italy.

Ambassador Demitu underscored the central role that Ethiopia has been playing for peace and stability of the Horn of Africa and its stance as one of the largest refugee-hosting country in Africa.

Giulio Tremonti, for his part, expressed his interest to work with his counterpart, the Foreign Relation and Peace Affairs Standing Committee of the House of Peoples’ Representatives of Ethiopia Dr. Dima Negewo in a way to strengthen parliamentary cooperation between the two countries.