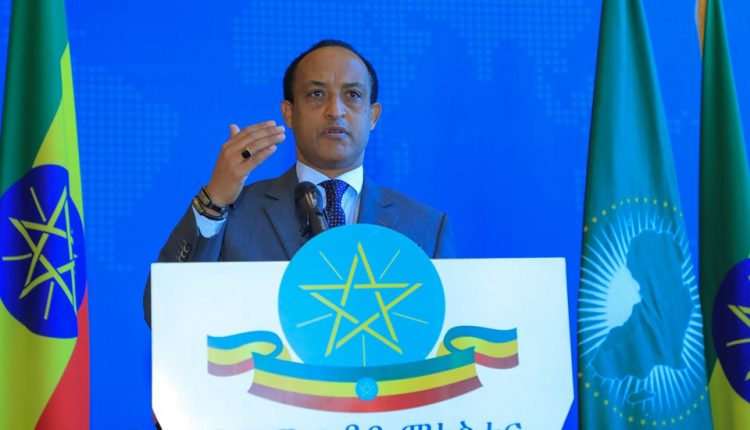 Spokesperson Meles Alem briefed the media today (December 2) on the various diplomatic activities that took place over the past two weeks.

The Press briefing focused on three major issues: I) initiatives underway to consolidate diplomatic gains after the coming new year, 2023; II) the 48th Ordinary Session of IGAD’s Council of Ministers held in Khartoum, III) Ethiopian government commitment to the implementation of the peace agreement and the remarkable international support to its implementation. The key takeaways are as follows:

The Government of Ethiopia is committed to consolidate and scale-up the diplomatic gains in 2023 despite daunting challenges for the past two years.

Meles stated that our missions in abroad are expected to step up efforts in terms of image building. Emphasis is placed on mobilizing the diaspora, expanding access to the international financing attracting investment flows and resource mobilization for reconstruction and rehabilitation.

In this regard, Ambassadors and senior officials of the Headquarter—a total of more than 130 participants—will undergo an intensive annual diplomatic retreat from December 18, 2022, to January 6, 2023, at the African Leadership Center of Excellence in Sululta.

The main goal of the training is to provide diplomats with the tools to defend their nation’s interests in the face of a rapidly shifting geopolitical environment. They will also consult and coordinate efforts to usher a post-conflict proactive diplomacy that Ethiopia will pursue in the coming years.

In a nutshell, Ethiopian diplomatic reengagement in 2023 will be centered on increasing friendly nations, re-intensifying our diplomatic engagements, and informing the government about its commitment to peace.

This is the first time in three years since Covid -19 pandemic the Session to take place in person. The meeting mainly focused on the current affairs of the region, how to jointly prevent and deal with man-made and natural disasters in peace and security.

Workineh Gebeyehu, Executive Secretary of IGAD presented a report on the status of IGAD’s institutional reforms. The Council of Ministers discussed and approved it.

Deputy Prime Minister and Minister of Foreign Affairs, Demeke Mekonnen, requested all member countries to provide strong support and play their role in making IGAD a strong and problem-solving institution. He also appreciated IGAD for its pivotal role in the peace agreement signed in Pretoria, South Africa between the Ethiopian’s Government and the TPLF. At the conclusion of the Ordinary Session, two protocols were signed regarding the free movement of people and transhumance.

The peace agreement is increasingly supported, as Ambassador Meles noted, and diplomatic relations is now returning to normal. Friends and partners of Ethiopia are providing the necessary assistance.

The President of Sudan’s Sovereign Transitional Council, General Abdul Fattah Al Burhan, expressed his satisfaction with the signing of a peace agreement between the Ethiopian government and TPLF. Sudan fully supports the implementation of the agreement, he affirmed.

The international community is also supporting the peace agreement.  United States, the European Union, the Middle East, and several other countries in Asia and the Pacific region have expressed their support for the peace agreement through their ambassadors. The ambassadors underscored that the agreement is crucial to the region’s stability.

He also noted that the premier also had a discussion with UN Secretary General, Antonio Guterres.

Finally, he mentioned engagements related to Citizen-centered diplomacy. In the past week, a total of more than 4,300 citizens have been repatriated from Zambia, Yemen, and Saudi Arabia. In addition to returning citizens, Ambassador Meles stressed that the government is working to ensure that their dignity and rights are protected in the countries where they live, as per MFA Ethiopia.