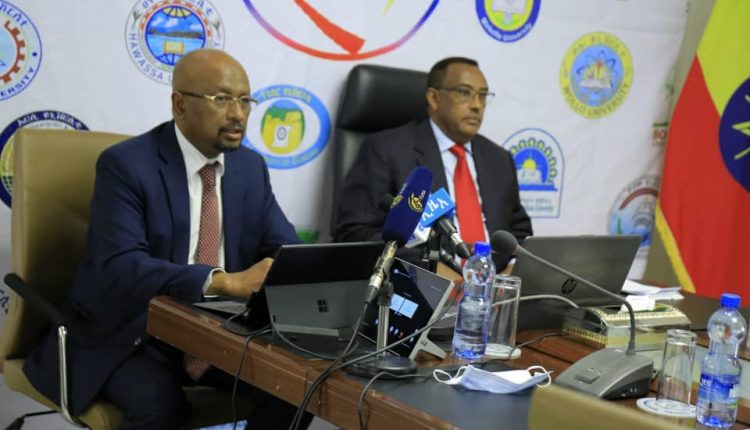 Addis Ababa, June 18, 2021 (FBC) – A high-level government officials have officially inaugurated the establishment of the Center for Public Diplomacy of Higher Education Institutions to enable students and instructors to push agenda items for the success of the Grand Ethiopian Renaissance Dam (GERD).

Deputy Prime Minister and Minister of Foreign Affairs, Demeke Mekonnen, Minister of Water, Irrigation and Energy, Dr. Sileshi Bekele, and Minister of Science and Higher Education H.E. Dr. Samuel Urketo were present at the official establishment of the center.

Along with the center, digital software dubbed “Nile Nations”, which is designed to facilitate communication among scholars and students of higher education institutions in the country for the issue of the GERD has also come into operation.

Speaking on the occasion, Demeke Mekonnen said it is high time for Ethiopians, including the community in higher institutions to stand up for their national interest, debunk unsubstantiated allegations and be assertive to equitably utilize the natural resource.

The Minister of Science and Higher Education, Dr. Rsamuel Urketo, on his part, said the center will not only bring students and scholars together in national affairs but also increase scientific research on the Nile water.

The “Nile Nations” software is developed free of charge by Yigremachew Eshetu, a lecturer at Wolayita Sodo University.