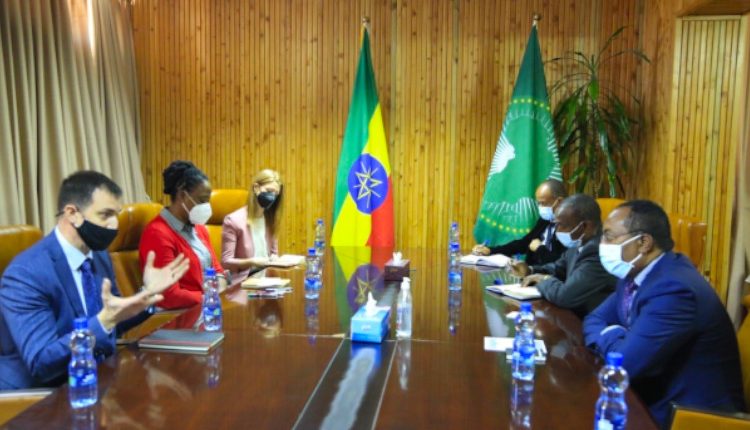 Addis Ababa, January 30, 2021 (FBC) – State Minister of the Ministry of Foreign Ambassador Redwan Hussien discussed yesterday with UN Under-Secretary-General for Safety and Security, Gilles Michaud on current situations in Tigray, particularly issues related to the humanitarian operations in the region.

During their discussion, Ambassador Redwan informed the Secretary-General that the law enforcement operation has already been completed and the priority of the government has shifted to fulfilling other important objectives.

In this regard, the federal government has focused on apprehending the criminals and bringing them to justice, delivering much-needed humanitarian assistance to those impacted by the operation and the reconstruction of damaged infrastructure.

Government agencies, international organizations, and other pertinent aid agencies are working in concert in delivering food and non-food items, including pharmaceuticals to impacted people under a well-coordinated framework led by the federal government, he added.

Ambassador Redwan underscored that it would be beneficial to all if humanitarian partners act within the coordination mechanism that is laid by the Ministry of Peace to facilitate the safe, effective and efficient delivery of assistance to those in need.

The discussion between the two sides also included the government’s efforts to rehabilitate IDPs in safe sites and the unsubstantiated claims regarding the situation of Eritrean refugees in Tigray as well as the underreported facts that could have revealed how the Junta has plundered some of the refugee camps.

The Under-Secretary-General, on his part, said the Humanitarian staff is not unmindful of some of the security concerns in the region, yet they are committed to assisting the humanitarian assistance efforts of the government.

The meeting between the two also addressed other issues of mutual concern.