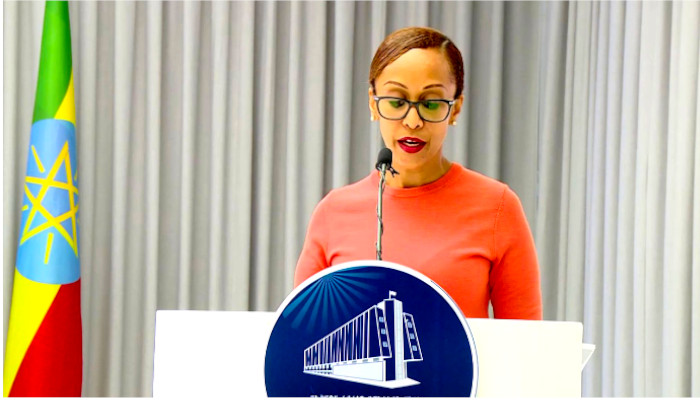 Addis Ababa, November 30, 2021 (FBC) – Press Secretariat of the Office of the Prime Minister, Billene Seyoum has briefed journalists of both the local and international media on latest developments in Ethiopia.

During the briefing session, Billene noted that it has been one week since the Prime Minister headed to the frontlines to lead the troops in person.

“This move by the Prime Minister has been grossly misrepresented by some in the west that continue to grapple with the context that is unfolding in Ethiopia” Billene said, adding that “his decision to lead the troops from the front is not an escalation rather it is a constitutional responsibility to preserve and ensure state cohesion which the Prime Minister is tasked with, Billene underscored.

“Over the past year the terrorist TPLF organization has been escalating and expanding the conflict into two other regions. More over their members based in the U.S. have openly declared efforts to overthrow a democratically elected government by force. Relatedly the same individuals based in the U.S. leading are leading treasonous efforts to topple democratically elected government violently, and have also been in discussion with former and current western diplomats conspiring in a leaked video to overthrow the government”, she said.

“With these overt sinister schemes at regime change attempts at an unconstitutional change of a government, the Ethiopian defense forces have launched the counter offensive on the terrorist organization and the Prime Minister is now leading it from the front” Billene indicated.

Billene explained that the decision to join the army in the battlefield does not mean a change on the government’s principled position of a peaceful solution to this conflict, rather averting the conspiracy of the terrorist organization which is working in collaboration with its foreign allies is a threat to the constitutional order of the state.

The decision made by the Premier has inevitably boosted troop morale and emboldened of the people of Ethiopia to unite, to resist and to push back the threats of the terrorist TPLF organization.

In the past few days alone, great strides have been made in forcing the TPLF to relinquish their occupation of key areas, particularly Kasagita, Chifra and Burka, and the advance on Mille front in the Afar region by the terrorist forces which was aimed at choking of the entire country, from the main corridor for goods entering into the country has also successfully been thwarted, she explained.

With further advances being made by government forces as we speak, the Prime Minister has also made a call today, and this call has been made to call TPLF fighters to surrender peacefully, and end the needless loss of a generation of Tigrayan youth who are being driven into the forefront by the TPLF.

This call is also an extension of the several similar calls that have been made by the federal government early in the conflict if you recall, and is aimed at halting further bloodshed.