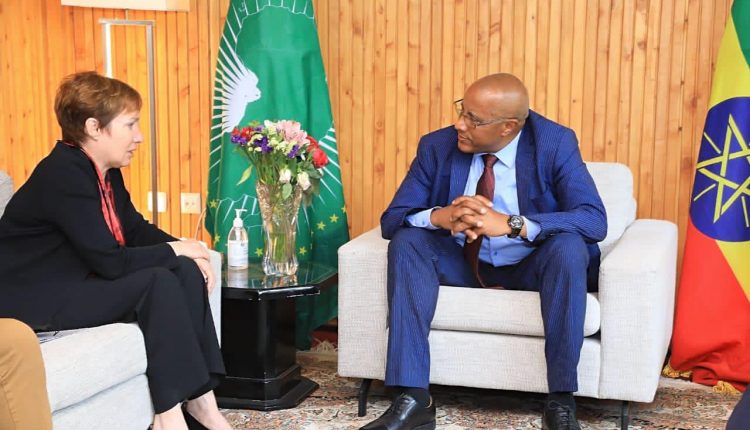 Reiterating the longstanding ties between Ethiopia and the United States, Ambassador Tesfaye expressed his country’s interest to normalize and revitalize the relations.

The State Minister highlighted the Ethiopian Government’s commitment to peace, stating the extra mile the government has travelled to make the peace initiatives of Olusegun Obasanjo fruitful.

According to Ambassador Tesfaye, provocative acts of the TPLF and its dubious stance regarding the peace initiatives of the Ethiopian government threaten to take the encouraging steps made so far back to square one.

He also recalled the government’s prompt action in implementing the recommendations of the joint OHCHR-EHRC investigation report to ensure accountability for human rights abuses in the conflict by establishing an Inter-Ministerial task force.

Ambassador Jacobson noted the encouraging activities of the Ethiopian Government mentioning efforts to give a peaceful political solution to the conflict and create unfettered access to humanitarian partners in the northern part of the country.

She reiterated her government’s interest to see durable peace in Ethiopia, further expressing belief that the Ethiopian government has the willingness and capability to achieve that.

Ambassador Tesfaye noted the negative effects of the suspension of Ethiopia from the AGOA preferential trade agreement on the lives of ordinary citizens and businesses and requested the U.S. government to reconsider its decision.

Ambassador Jacobson expressed her hope that the Ethiopian government’s encouraging actions to give a peaceful settlement to the conflict and facilitate conditions for the smooth flow of humanitarian supply to conflict-affected people are promising steps to consider Ethiopia’s request for reinstatement for AGOA.