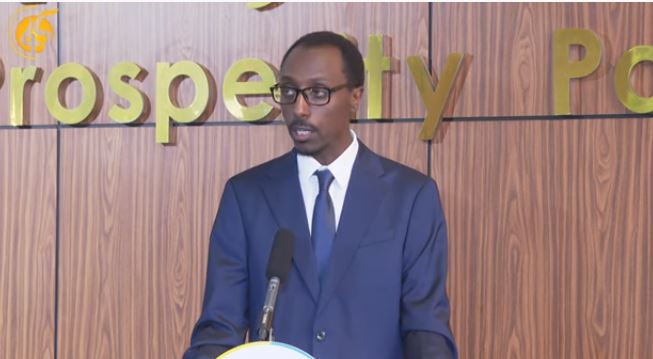 Addis Ababa, June 27, 2022 (FBC) – Member of the Central Committee of  the ruling Prosperity Party (PP) and Minister of Justice Gedion Timothewos (PhD) stated that Executive and Central Committees of the party have deliberated upon the option of peaceful resolution of the conflict in northern part of Ethiopia.

Both committees have deliberated upon the report and the recommendation of the committee formed so far and they have unanimously decided that the effort to find a peaceful solution to the conflict in the north should continue and be strengthened further.

Factors taken into consideration by the two committees include the need to peaceful resolution to the disagreement and dispute in the north and the fact that the conflict has been imposed upon the Government of Ethiopia, Gedion said.

Prior to the commencement of the conflict, the ruling party and the federal government have done everything within their power to find an amicable solution to the conflict, Gedion underscored.

“Once the conflict had started as well including through declaration of the unilateral ceasefire, the federal government had tried its level best to find a peaceful solution to the conflict,” he said.

Both committees have taken into account that peace is essential and of paramount importance for Ethiopia’s political and reform initiatives, according to Gedion.

“Furthermore, both committees underscored the need to put an end to this tragic chapter in the history of Ethiopia and expressed an aspiration to move towards reconstruction, rehabilitation and reconciliation of communities that have been affected by the conflict,” he noted.

“The committees also reiterated the need to avoid further bloodshed and to end the suffering and misery that have been occasioned by the conflict. Furthermore, both expressed the need to foster national consensus through the process of the Inclusive National Dialogue,”

“Both committees underscored that the process should be pursued in a manner that is in accordance with fundamental principles including the respect to the constitutional order and constitutionalism, respect for the fundamental national interest of the Ethiopian people and the Ethiopian state and the role of the African union as a facilitator of the process in accordance with the principle of African Solution to African problems,” he added.

Committees also emphasized the need to be ready for any eventuality and outcome, Gedion stressed.

“However, we are also realistic about the daunting challenge ahead of us and the need to be ready for any provocation or attack so we hope for and work for the best but we shall be prepared for scenarios that are far from the best.”