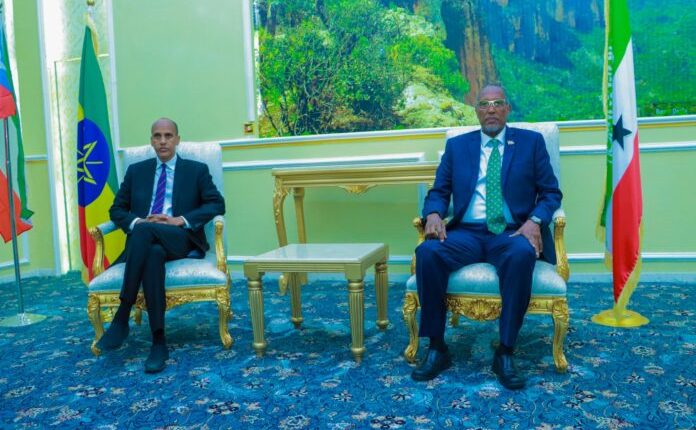 Addis Ababa, November 29, 2021 (FBC) – President of Somaliland Muse Bihi Abdi affirmed commitment of his government to the struggle Ethiopia has declared to quell existential threats it is facing currently.

The two explored ways how to boost the trade ties between Ethiopia and Somaliland for mutual prosperity.

Somali Region President Mustafa Omer, for his part, explained about the activities to be undertaken jointly by governments of Ethiopia and Somaliland to maintain regional peace and security.

Mustafa stressed need to concerted efforts to fend off external intervention in the Horn of Africa, adding that “the destiny of people of the region is inextricably intertwined; therefore, they shall not allow any third party to decide on behalf of them”

“Ethiopia and Somaliland enjoy cordial bilateral relations anchored on the principles of mutual respect and mutual interest. Representing the Government of Ethiopia and the Somali Regional State, we agreed with our Somaliland brothers to further enhance security cooperation, and economic and social integration.” Mustafa added.

President Muse Bihi Abdi also expressed commitment of his government to the military action Ethiopia is taking in northern part of the country to defend its sovereignty.

He also indicated that the Berbera Port is being effectively utilized by Ethiopia after it had been expanded by the UAE, pledging his continued commitment to enhance the trade ties between the two sides.