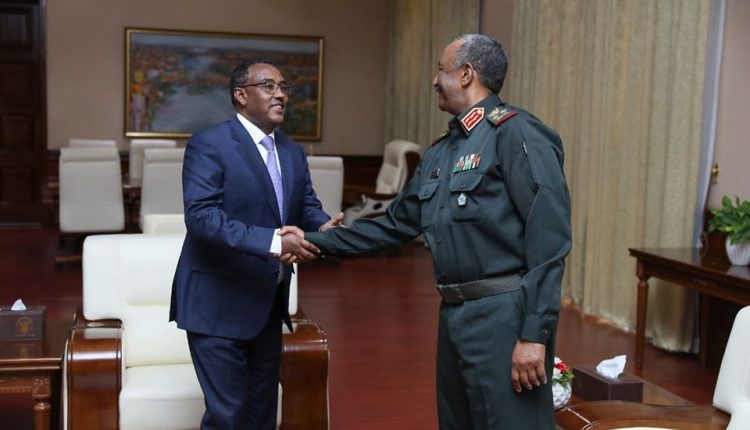 Sudan will not tolerate elements try to attack Ethiopia from its territory: Gen. al-Burhan

The two agreed to work in collaboration to enhance bilateral and regional cooperation between Ethiopia and Sudan.

Gen. Abdel Fattah al-Burhan expressed his delight over the signing of the peace agreement between the federal government of Ethiopia and Tigray People’s Liberation Front (TPLF), pledging support to the implementation of the pact.

He also underscored that Sudan will not tolerate elements which trying to disrupt the implementation of the agreement and attack Ethiopia spring from its territory.

The two nations have agreed to settle border-related issues bilaterally through agreements signed before and existing mechanisms as resorting to force will not result in a durable solution. Regarding the Grand Ethiopian Renaissance Dam, the two sides stated their conviction that the goodwill and cooperation between Sudan and Ethiopia will contribute to the attempt to address the differences in a trilateral manner.
The Sudan’s President Al-Burhan and the Deputy Prime Minister Demeke have agreed to jointly prevent illegal human, arms and drug trafficking in the border area. They have also agreed to enhance cooperations more than ever before on bilateral and regional issues of mutual interest.
Earlier, Deputy Prime Minister and Foreign Minister Demeke also held talks with Sudan’s Vice President Mohamed Hamdan Dagalo and Acting Foreign Minister Ali Al-Sadiq. During the discussions, Demeke emphasized that cooperations should be given to strengthening people-to-people ties between the two countries.
Acting Foreign Minister, Ali Al-Sadiq, on his part, expressed that Sudan is happy with the signing of a peace agreement between the Ethiopian government and TPLF announced that his country will support its implementation and play a positive role.
He also mentioned that the peace of one country is a peace for the other. He further thanked Ethiopia for its contribution and partnership in making the IGAD foreign ministers’ meeting held in Khartoum a success.
A delegation led by Demeke Mekonnen has been attending the 48 IGAD meeting of Ministers in Khartoum, The Sudan.
224
Share FacebookTwitterTelegramWhatsAppEmailViberPrint
You might also like
Local News

Concerted preparations being made to restart universities in Tigray region