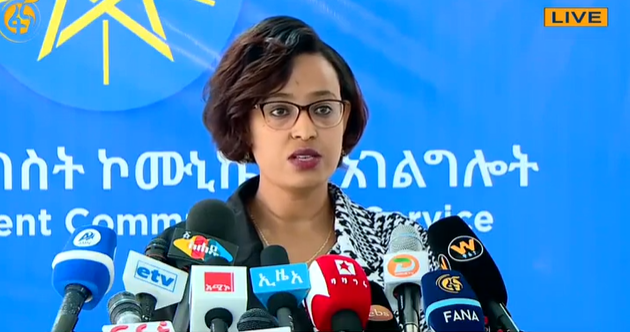 Addis Ababa, December 6, 2021 (FBC) – Government Communications Service has announced that the terrorist TPLF brutally massacred hundreds of innocent civilians in Gashena, Antsokia Gemza and other parts of the Amhara Region it invaded.

State Minister of the Government Communications Service, Selamawit Kassa stated that the terrorist organization has looted and vandalized private and public properties and destroyed a number of tourist attraction sites apart from the horrendous crimes it committed against civilians.

The crimes committed by the terrorist group have been uncovered after the areas were liberated by the joint forces. Mass graves have also been found in areas where massacres were committed by the Junta forces.

Concerned international organizations are expected carry out detail investigations on the crimes and unveil the report on the atrocious brutality of the Junta, Selamawit said.

Menz Guassa, Borena Saint and Guna and Abune Yoseph community conservation area and the Worehimenu National Park in Amhara Region have been destroyed by the terrorist Group putting livelihoods of thousands of beneficiary households at state, she noted.

Ethiopia has lost 25 million Birr worth annual income from the tourism sector in these areas.

Saying that the #EthiopiaEthiopianHomeComing arrangement for the Diaspora, the State Minister called on Ethiopians and people of Ethiopian descent across the world to think over how to support the tourism sector in particular and the wider economic sphere affected by the war.

Close to 36 million people who were beneficiary of the tourism sector have been deprived of economic benefit related to the tourism industry, she said.

Likewise, the terrorist Group inflicted massive destruction to cultural and religious sites, natural and historical tourist attraction sites and infrastructures in the Afar Regional State. Vandalism committed on religious sites are intended to inflict morale injury on the faithful, she added.

Some activities have been started to revitalize the tourism sites affected by the invasion of the terrorist group, she said, adding that the Government of France has pledged to renovate the World Heritage Site Lalibela Rock Hewn Churches, she added.