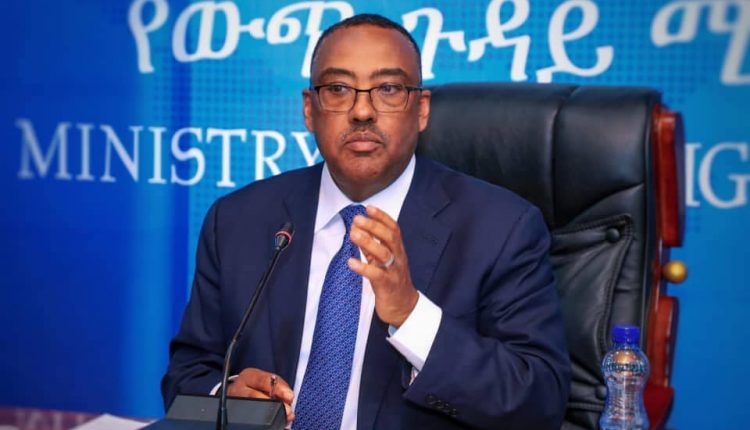 The ball is in TPLF’s court following government’s decision not to continue military operation in Tigray: DPM Demeke

Addis Ababa, January 1, 2022 (FBC) – In a recent message, Deputy Prime Minister and Foreign Affairs Minister, Demeke Mekonnen said that Ethiopia, as a nation with long history and a member of the global community, is in a better position to overcome attempts by both internal and external distractors trying to undermine its sovereignty and territorial integrity.

“History is a witness of the fact that none of the wars through which Ethiopia had to experience in the making of Ethiopia herself. Some were colonial wars of aggression, while others were ideologically driven on the nation. Even those internal conflicts that lack of internal character have sometimes been caused and accompanied by external factors.”

“The current conflict in northern Ethiopia is not unique in terms of its genesis and ramifications. It is a war between forces bent on destroying the political and social fabric of Ethiopia and those that are defending the existence of the country as a political entity. It is a war between forces that intend to perpetuate anarchy, inter-ethnic strife, societal division for dominance on one hand, and those who want to see an Ethiopia that treats all its citizens equally on the other hand. Many outsiders have grossly misunderstood or misconceived the true nature of the Tigray Peoples Liberation Front (TPLF). Some governments saw TPLF as a Trojan horse to reckon with and advance their geopolitical and economic interests in the Horn of Africa.”

“The TPLF is a minority group that plundered Ethiopia’s scarce resources; killed, tortured, and imprisoned hundreds of thousands of citizens; divided and ruled Ethiopia for nearly three decades. The fact that the TPLF was toppled by popular grievances and uprisings in 2018 is seen by some western governments having lost dependable ally to advance their core interests is mysterious. This cannot be adequately explained in this short article. It requires careful research and detailed examination.”

However, this is not to externalize the root causes of the country’s conflict-ridden history and the current situation it finds itself in. Nor is it to deny the critical roles of internal factors, such as that of the TPLFs greed, divisive politics and power-monger behaviors that to a certain extent were causes and consequences of Ethiopia’s current war conflict.

The question is: have we learnt enough from such unfortunate episodes of past and current wars and conflicts? As much as the current generation is proud of the heroic history of its forefathers and foremothers, there are certainly issues of concern that require reflection, persistent dialogue, and soul-searching. The current Government of Ethiopia has a historic responsibility and duty to facilitate and spearhead such a process as urgently as possible.

Of course, the necessary groundwork for such a process has been laid down and it is expected to begin soon. The Ethiopian National Dialogue Commission has already been established to help settle major differences. The aim is to reach a shared understanding of our common history, seek collective solutions to our current and inter-generational challenges, and chart the way forward.

From our history and current situation, we Ethiopians fully understand that there is no alternative to peace and stability. Wars and armed conflicts have never resolved problems. They only exacerbate perceived or real intensions, destroy infrastructure and livelihood as well as suck meagre human and financial resources. Conflicts are also known for causing loss of productivity, disruption of trade, education, and health priorities, etc.

Ethiopia is not an exception to these adverse consequences of wars or armed conflicts. However, whatever the cost may be, Ethiopians rightly chose the preservation of their country and in unison said “NO” to the conspiracy which aims at fracturing and/or erasing their country from the global map of nations. The highest stake is the preservation of Ethiopia as a vibrant and stable nation in the Horn of Africa. In essence, the war of survival and restoration of order in northern Ethiopia has galvanized the unity of the country more today than ever before. We want our partners particularly, from the West to understand what is at stake here, he said.

They need to refrain from chipping away at our longstanding relationship with sanctions and unnecessary pressures on the Ethiopian government. We need them to open their eyes and understand that the TPLF is left with a bankrupt ideology and is losing militarily and politically too. We hope the world will one day see the full extent of the unspeakable atrocities and damages to infrastructure perpetrated by the TPLF. Ethiopians are done with the TPLF and many diplomatic wrangling would have been avoided the international community had chosen to understand this. The only option left is to strengthen efforts as forging ties with the democratically elected government of Ethiopia, a path that is mutually beneficial.

On the other hand, Ethiopia owes enormous and deep gratitude of debt to those friendly countries both from Africa and elsewhere in the world- for their unflinching support to our struggle for survival. It is also heart-warming to see people from all corners of the world joining the global “#NoMore” movement in support of Ethiopia.

History is once again repeating itself as in the past. The people of Ethiopia are emerging victorious in a just war against those forces that wanted its dissolution. Ethiopia is now ready to move towards resettlement of internally displaced people, rehabilitating, reconstructing and restoring basic infrastructure and services to its citizens. The government and the people of Ethiopia have also been making conscious efforts to avoid similar destruction in the future by collectively addressing root causes of grievances, disagreements, and eventual polarization – be it regional or inter-ethnic. There is equally an urgent need to do likewise in the Tigray regional state and to free our Tigrayan compatriots from the yokes of a dying TPLF.

“Currently, the Government of Ethiopia has decided not to continue perusing active military enforcement against the TPLF in the Tigray Regional State. Many have welcomed the decision as it opens a window of opportunity to consider other options of resolution that exists without recourse to war. The ball is fully now in the courts of the TPLF. In this regard, those who advance ill-intended interests should resort to playing a positive role in order not to spoil this opportunity. It is equally important for our development partners such as the US and the European Union to play a constructive role in their relationships with Ethiopia.”

We regret certain hasty decisions of the US Administration in penalizing Ethiopia for not bowing down to pressure. The US Administration and legislative bodies should realize the colossal socio-economic damage that their various sanctions and other measures can cause on vulnerable nations, citizens, and economies including Ethiopia. Available evidence and analysis show that the US sanctions disproportionately hurt the poor and the needy by undermining efforts of governments and domestic institutions to provide health, education, and other vital services to the most vulnerable section of the society.

Ethiopia also strongly and unequivocally urges the United Nations to reinvent itself with regard to its stance on the current Ethiopian conflict to continue to be a viable, balanced, and credible global institution. It should refrain from treating factions and rebels on an equal footing with elected legitimate governments which are members of this august entity. The UN Security Council held unnecessary and more frequent meetings on Ethiopia in one year than any other member state in the past. Moreover, the UN Human Rights Council’s resolution on the establishment of an Independent Commission of Investigation on Human Rights Violation in Ethiopia shows utter bias, power play, and fractured global governance that requires urgent fixing. The UN should not and cannot advance global peace and stability if it continues to be serving the hegemonic political and economic agendas of a few powerful nations.

Although democracy, rule of law, and human rights are vital for every nation, they should be framed to fit each country’s cultural, institutional, political, and overall local conditions. The UN in particular should stand for consistent clear norms and yardsticks when it invokes human rights in international relations. The way forward to protect and promote global peace and security, as well as human rights, is through dialogue, which is based on the United Nations Charter, international laws, and mutual respect.

Ethiopia will continue with her primary responsibilities to create conditions and policies for an inclusive and sustained economic growth and development. The way forward in addressing global challenges and risks is through partnership, constructive dialogue, and mutual respect.