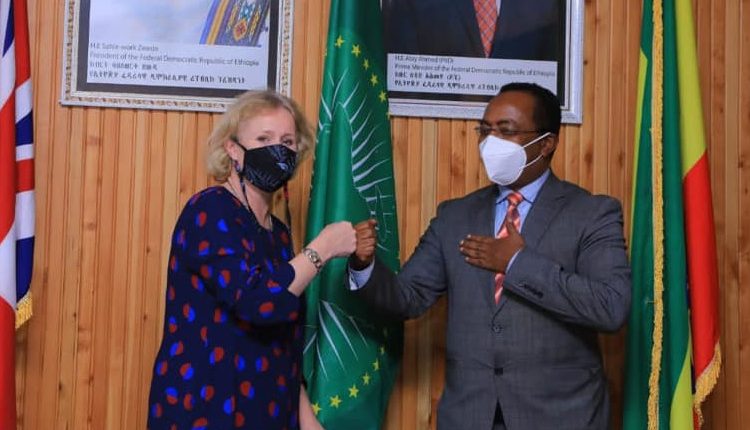 Addis Ababa, January 21, 2022 (FBC) – State Minister, Ambassador Redwan Hussien had a discussion yesterday at his office with Vicky Ford, UK’s Minister for Africa, Latin America, and the Caribbean about current issues in Ethiopia and the relationship between the two countries.

During their discussion, Vicky Ford said, as a longtime friend of Ethiopia, the UK would like to work with the country on many issues, including investment which necessitates a peaceful environment to operate.

She appreciated the decision of the government of Ethiopia not to lead its military forces into the Tigray region as commitments of the Ethiopian government to have peace in Ethiopia.

She appreciated the release of prisoners as a good sign from the Ethiopian government and ongoing efforts to have an all-inclusive dialogue for lasting peace in Ethiopia.

The minister spoke on the need to hold people accountable for sexual violations in conflict areas and noted the commitment of the government to look into the matter starting from cooperation during the joint investigation of UN-EHRC.

The State Minister, on his part, reiterated the continuous efforts of the government to ensure the flow of humanitarian aid into the Tigray region.

He said the government is willing to allow daily U.N. humanitarian flights to Mekelle and extra cash for humanitarian operators in the region.

He said the TPLF started the conflict without a sufficient cause and expanded it, mocking the Unilateral Humanitarian Ceasefire declared by the government.

Above all, he said the TPLF has continued to shell Abala city in the Afar region unprovoked, further obstructing the humanitarian supply to Tigray.

He also further stressed that the TPLF has continued obstructing humanitarian operations by misusing fuel reserves and discarding safety arrangements made for truck drivers.

Regarding the drone attacks in the region, he said that it would be unfair and a baseless complaint since the TPLF has continued training militants and attacking adjacent regional states.

Ambassador Redwan called on the international community to balance the attention it gives to the humanitarian concerns and human rights violations in the Tigray region with the wrongs of the TPLF.

He said the international community should squarely condemn the wrongdoings of the TPLF in the Amhara and Afar regions and take into account the humanitarian needs of affected people there.

Finally, Ambassador Redwan appreciated the U.K. for being interested in Ethiopia’s current situation and continuing as a reliable partner in development and democratization efforts.