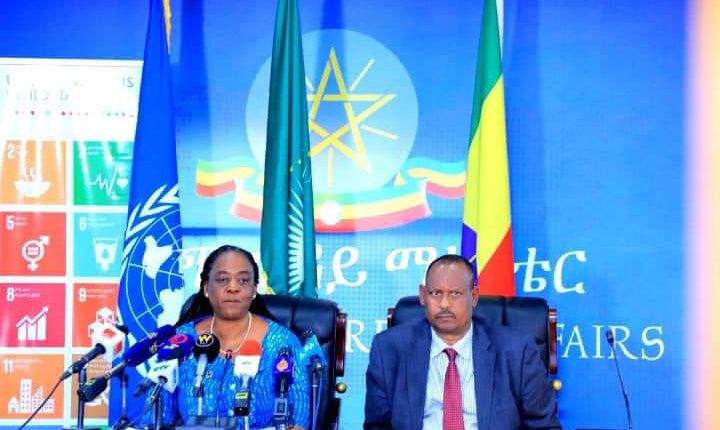 Mitiku outlined the efforts that the government of Ethiopia has been undertaking in ensuring unimpeded humanitarian aid supply to affected areas since the declaration of the unilateral humanitarian ceasefire last June.

He listed the considerable reductions of checkpoints, extensions of visas, blanket approval of travels, access to communication materials, and cash as positive developments from the government side.

Unfortunately, he said the UN has failed to squarely condemn the destructive acts of the TPLF that exacerbated the dire humanitarian situation in all of the affected areas.

The UN should also openly condemn the TPLF for using food as a weapon of war in the Amhara region by blocking aid supply from people who are under the Safety Net Program.

He finally called on the UN to cooperate with the government of Ethiopia in supporting the more than 8 million food-insecure people because of the invasions of the TPLF in the Amhara and Afar regions.

Dr. Catherine Sozi, on her part, detailed the humanitarian aid supply services that the UN has been undertaking in all of the affected areas in northern Ethiopia.

She said the TPLF soldiers looted humanitarian aid warehouses in Kombolcha with the participation of some members of the community halting the UN aid services in the area.

Commissioner Mitiku denied this report claiming that the TPLF soldiers had looted the warehouses and staged a drama afterward, taking pictures of local people who pretended to participate in the looting.

According to the UN Resident and Humanitarian Coordinator, three aid trucks are still in the hands of Ethiopian soldiers reshuffled for war purposes.

In this regard, Commissioner Mitiku questioned the UN for being reluctant to denounce the TPLF for hijacking more than 1000 aid trucks.

He also questioned the UN’s silence over the 203 unreturned trucks that entered the Tigray region last month, since November 23, 2021.

Dr. Catherine also said shortages of fuel, cash, and some hurdles in Afar, have made the humanitarian aid supply to the Tigray region challenging.

She expressed her hope that consultations with the people and administrators of Afar would give solutions to the 115 trucks loaded with aid supplies that are ready to head to Tigray.

The Commissioner downplayed the story of fuel shortages in Tigray, recalling that the TPLF had recently looted the Kombolcha fuel depot and possessed 14 million liters of fuel that the government had left in Mekelle before evacuating troops.

Dr. Catherine finally denounced allegations on the partiality of the UN in supplying humanitarian aid, affirming that the purpose of the UN in Ethiopia is to support the people of Ethiopia.