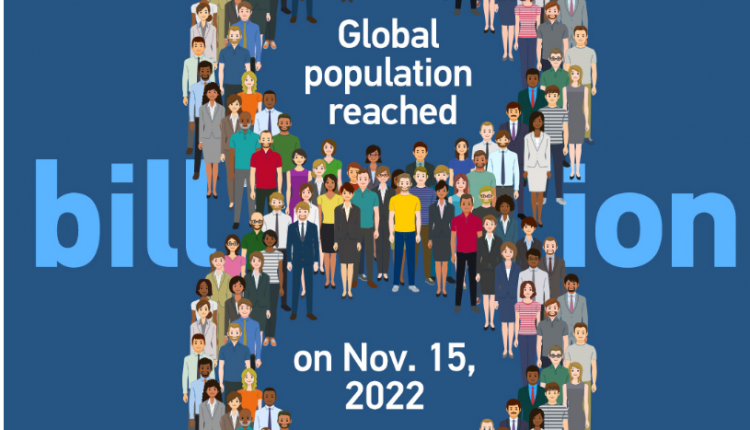 “The milestone is an occasion to celebrate diversity and advancements while considering humanity’s shared responsibility for the planet,” UN Secretary-General Antonio Guterres said in a statement.

It took humans a bit over 11 years to grow the last billion population, roughly the same time span for us to grow from six billion to seven.

Reaching eight billion people is “a sign of human success, but it’s also a great risk for our future,” said John Wilmoth, director of the UN’s population division.

Middle-income countries, mostly in Asia, accounted for most of that growth, gaining some 700 million people since 2011. India added about 180 million people and is set to surpass China as the world’s most populous nation next year.

However, births have been steadily declining in the United States, Europe and Japan.

Even while the global population reaches ever-new highs, demographers note that the growth rate has fallen steadily to less than 1 percent per year. This should keep the world from reaching 9 billion people until 2037. The UN projects population will peak at around 10.4 billion people in the 2080s and remain at that level until 2100.

“A big part of this story is that this era of rapid population growth that the world has known for centuries is coming to an end,” Wilmoth said.

As China eliminated absolute poverty and built a moderately prosperous society, many speculate that the people will become less willing to have children. The country has made new policies to encourage families to have second and third children.

Whether its food or water, batteries or gasoline, there will be less to go around as the global population adds another 2.4 billion people by the 2080s, according to UN projections.

Most of the 2.4 billion people to be added before the global population peaks will be born in sub-Saharan Africa, marking a shift away from China and India.

While more people consuming energy, mostly from the burning of fossil fuels, is warming the planet, the key issue isn’t the number of people as much as how a small fraction of those people are causing way more than their share of carbon pollution, several climate and population experts told media.

East Africa’s Kenya, which is suffering through a devastating drought, has 55 million people, about 95 times more than the population of the state of Wyoming in the U.S. But Wyoming emits 3.7 times the carbon dioxide as Kenya. Africa as whole has 16.7 percent of the world’s population but historically emits only 3 percent of the global carbon pollution, while the United States has 4.5 percent of the planet’s people but since 1959 has put out 21.5 percent of the heat-trapping carbon dioxide, according CGTN’s report.

The average Canadian, Saudi and Australian put out more than 10 times the carbon dioxide into the air though their daily living than the average Pakistani, where one-third of the nation was flooded in a climate change worsened event. And in Qatar the per capita emissions is 20 times Pakistan’s, according to the World Bank.

Humanity’s impact on the natural world “has more to do with how we behave than how many we are,” Wilmoth said.