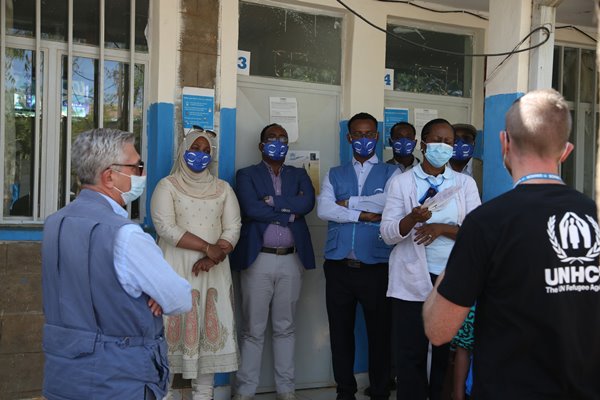 Addis Ababa, January 31, 2021 (FBC) – Agency for Refugee and Returnee Affairs (ARRA) has said it is working towards providing improved services to Eritrean refugees hosted in Tigray.

ARRA Director General, Tesfahun Gobezay said Ethiopia is not only a country hosting the largest number of refugees but also has put policy in place to integrate them.

He added that various works were undertaken over the last six months to improve the refugee camps.

The erroneous information being spread that the Eritrean refugee camps were attacked during the law enforcement operation is contrary to the reality on the ground, Tesfaun elaborated.

State Minister for Foreign Affairs, Redwan Husein said the visit is essential to make sure the area is peaceful and be able to address any problems that may arise from refugees.

Peace Minister, Meferiat Kamil emphasized on her part that Ethiopia give due consideration to refugee than anyone else.

The misleading information being spread is unverified, she stated, and added if it happened the government will investigate and take legal measures.

Ethiopia hosts more than 1 million refugees of which about 100,000 are Eritreans. Of the total 100,000 Eritrean refugees 46,000 are hosted in four camps in Tigray, according to ENA.