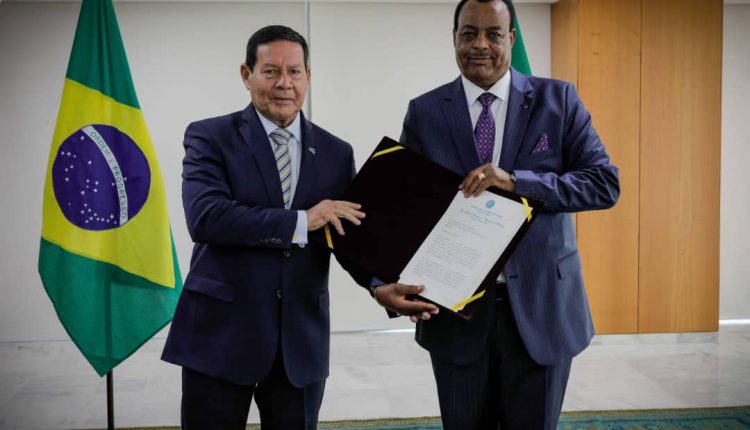 Brazil reaffirms commitment to scale up bilateral relations with Ethiopia

At the outset, the Ambassador expressed his heartfelt condolences for the lives lost due to the unforeseen circumstances in the North-Eastern Region of the country.

The Ambassador conveyed greetings and best wishes of the President of the Federal Democratic Republic of Ethiopia, Sahlework Zewde, and later recalled the long-standing and historical relationship between the two countries and underscored the need to further scale it up with renewed engagements.

Ambassador Tafa also took the opportunity to brief the Vice-President about the measures taken by the Government of Ethiopia to ensure enduring peace in the country.

The Ambassador further explained about the rehabilitation and reconstruction programs in conflict-affected areas, including the establishment of the National Dialogue Commission.

Ambassador Tafa also expressed the commitment of the Government of Ethiopia to resume the trilateral negotiations with Sudan and Egypt to find amicable solution for outstanding issues over the GERD.

Vice-President Antonio Hamilton Martins Mourã, on his part, expressed gratitude for the goodwill wishes of the Ethiopian President and the people of Ethiopia.

Vice-President Antonio Hamilton Martins Mourã has also reaffirmed Brazil’s determination to scale up bilateral relations with Ethiopia and pledged to extend all necessary support to the Ethiopian Ambassador.