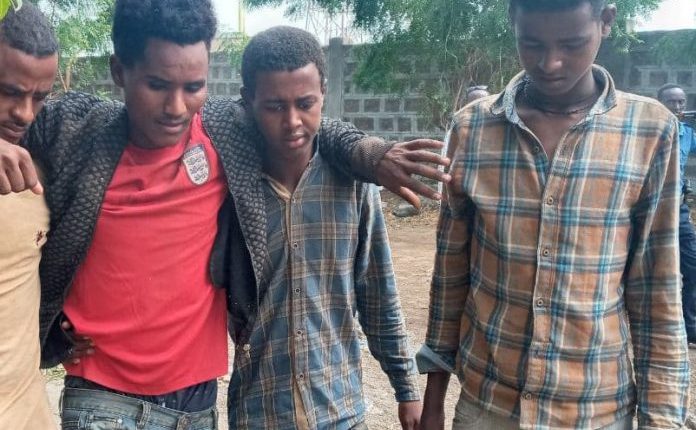 Addis Ababa August 4,  2021 (FBC) – Leadership of the terrorist group TPLF have been committing war crime against teenagers of Tigray region.

One of the teenagers, Hiwot Hawaz recalled that his parents and him were very shocked when the kebele (local) leaders appeared at their residence in Adwa town and announced that he was wanted.

Though he had no preparation or skill to fight, he said they sent him to front along with the teenagers in his locality. It was at that time that he decided not to continue fighting.

He revealed that he was attempting to flee from the war front when he was wounded and captured.

”It is shameful for the entities which forced us and the people into this unjust war,” the teenager said, adding that the people of Tigray should stand up against them.

The other teenager soldier from Shire Enda Selassie, Gebrelibanos Yeman said he was forced to engage in the war by the local officials who said “Tigray is invaded and should be freed.”

He blamed the terrorist TPLF leadership for forcing poor children into war by asserting the people should struggle while keeping their children in safe conditions, the teenager lamented.

According to him, many teenagers were either killed or injured while some escaped, including himself who fled from the Afar front on being defeated tried to run away throwing his gun when he was captured.

The teenager recruited from the regional capital Mekelle, Gebre Araya, said he was sent to the Afar front with little training on how to dismantle machine gun.

“We came unarmed as they told us we would get weapons by disarming the ENDF or confiscate them from wounded soldiers. Scared at the battle, I was trying to flee when I got captured,” he stated.

He bitterly recalled that “children of the leadership are living in peace while we are forced into a war front. All Tigrayans should condemn this.”

Afar Region Correctional Facilities Deputy Commissioner and coordinator at the front, Mohammed Ahmed told ENA that the operation to thwart the evil plot of the terrorist TPLF has continued successfully.

“However, the TPLF terrorist group which is on the verge of extinction is still abducting underage teenagers from Tigray and sending them to war to prolong its life,” he added.

Deputy Commissioner Mohammed called on Ethiopians to continue their struggle united, according to ENA.