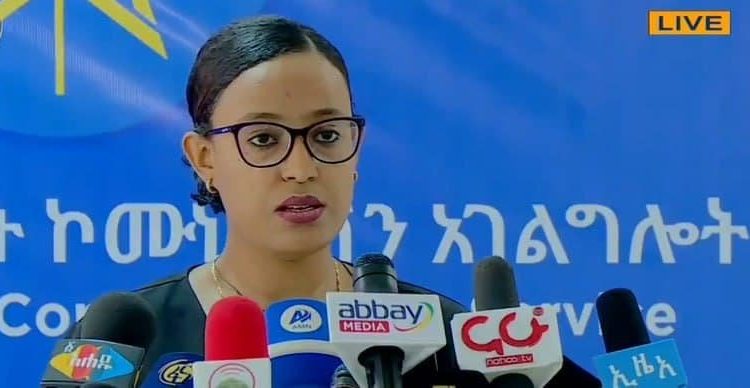 Addis Ababa, December 20, 2021 (FBC) –  State Minister of the Government Communications Service, Selamawit Kassa, in a press briefing, stated that the Government of Ethiopia has been ramping up constructions of large scale irrigation schemes concurrent to the existential war.

Saying that the government has given due attention for irrigation development, Selamawit added that activities are well underway to increase productivity of fruits and vegetables in regular irrigation farming apart from the efforts to boost wheat production.

As per the regular irrigation scheme, 349,000 ha of land has been cultivated of which 311,000 ha is covered with fruits and root vegetables, Selamawit added.

The state Minister indicated that 146,000 ha of land has been covered with irrigated wheat out of 256,000 ha that was cultivated for similar purpose.

It is planned to collect 16 million quintals of wheat from Bega season irrigation based wheat production out of the farming to be undertaken on 400,000 ha of land.

The State Minister added that Ethiopia plans to build 17 irrigation projects with 9.8 billion birr in the current fiscal year.

Preparation of tree seedlings has also been prioritized by the government in line with the national Green Legacy Initiative, the State Minister added.

On the other hand, the State Minister stated that the terrorist TPLF has caused destruction of social service institutions and infrastructures besides brutal atrocities it committed against innocent civilians in areas it invaded.

Regarding the third Turkey-Africa Partnership Summit, Selamawit underlined that the forum has accommodated fruitful discussions that would help African countries ensure self-reliance in several aspects.

Ethiopia and Turkey have discussed on way of enhancing multifaceted cooperation in several areas on the side lines of the Summit, she added.