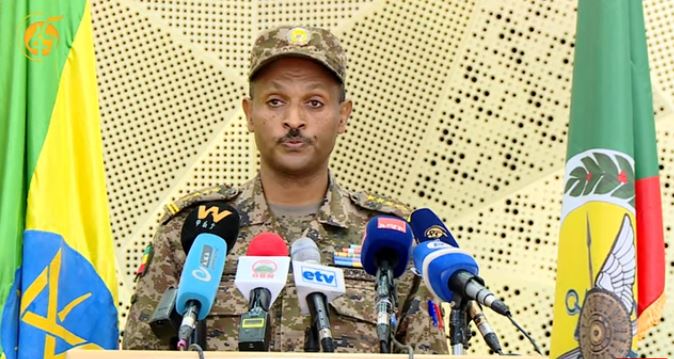 Col. Getnet said the recent incident the incident took place within Ethiopian territory after incursions by a Sudanese regular army unit supported by elements of the terrorist TPLF and other forces betrayed the army.

Colonel Getnet elaborated that members of the Ethiopian Defense Force were not present in the areas where the incident took place when the Sudanese army encroached the Ethiopian territory clashed with local militias.

The Sudanese Army has continued its belligerence in border areas as a means to repress internal political crisis and divert public attention in Sudan although Ethiopia insists on its peaceful approach to address the situation.

The Ethiopian army is committed to its longstanding military professional ethics in handling of prisoners of war and related matters. “It is its popularity, discipline and outstanding achievements make the Ethiopian army chosen to regional and global peacekeeping missions,” he said.

He noted that the Ethiopian military’s discipline had been demonstrated during the Korean and Congolese campaigns, and it is the two Sudans themselves that chose the Ethiopian army to deployment of its members in the peacekeeping mission of the Abyei region, and they praised it for its outstanding achievements, he noted.

The Sudanese army’s accusation that the Ethiopian army had killed captives was unfounded and baseless, he said. Colonel Getnet added that even if the army was there and had captured prisoners of war, it would act in compliance with the law.

The Public Relations Director added that the Ethiopian Army is ready to cooperate with any external body interested to conduct investigation on the situation. He added that Ethiopia is ready to work with a committee comprising representatives of the two countries’ armed forces to investigate the attack.

Ethiopia is still perusing peaceful ways to resolve the situation taking the longstanding people to people ties between the two countries into consideration. It is not customary to the Ethiopian national army to engage in banditry to protect the sovereignty of the country. It is in a better position to shatter any belligerence in a dignified and apparent manner, he added.