Addis Ababa, February 28, 2021 (FBC) –The Grand Ethiopian Renaissance Dam (GERD) office has announced plan to establish a forum to coordinate the participation of scholars in the construction of the dam.

In order to establish the forum soon, the office had already established an interim committee whose members are drawn from the Ministry of Science and Higher Education and Ministry of Water, Irrigation and Energy as well as universities.

Professor Afework Kassu, State Minister of Science and Higher Education, said his ministry will provide support for the establishment of the forum by coordinating universities.

He said the forum should work to counter disinformation regarding the filling of the GERD to make sure that the international community get the exact information about the Nile River.

In a related development, Minister of Water, Irrigation and Energy, Dr Seleshi Bekele, briefed Ethiopians drawn from 15 states of the United States about the current status of the dam. 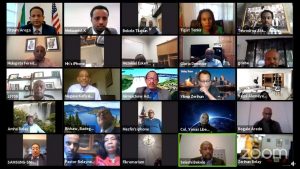 In a zoom meeting held in connection with the 125th anniversary of the Battle of Adwa, Dr Seleshi said the GERD project is now more than 78% complete.

Ethiopia does not recognize any colonial based and unfair treaties, he said, adding the country will continue developing its natural resources without causing significant harms to downstream countries.

The Minister also called on all Ethiopians to repeat the victory gained in the Battle of Adwa by providing support until the construction of the dam is completed.