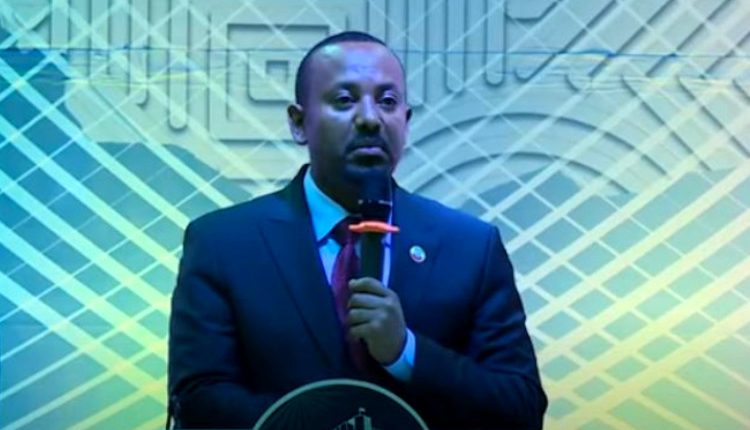 Addis Ababa, June 30, 2021 (FBC) – Prime Minister Abiy yesterday briefed journalist of several media on the recently declared humanitarian ceasefire in Tigray and withdrawal of the army from Mekelle and other towns in the region.

The premier recollected pre-law enforcement circumstances in the region as he clarified issues regarding the decision made by the government to declare the unilateral ceasefire.

He said the major objective of operation that was carried out by the government in the region was aimed to neutralize the Junta, recapture armaments and set national army free from the Junta in the region for military preparedness in other fronts over security treats posed by various outside forces.

Premier indicated that the community in Tigray region opposed withdrawal of the armaments from the region thereby supported the Junta to step up preparations for the treachery it did against the army.

“We have accomplished withdrawal of the armaments and other military property from the region through the recent operation. We have now in a good position to prepare to protect the sovereignty of the nation from any outside threats.” he said.

The federal government has invested more than 100 Billion Birr to rebuild and repair infrastructures damaged by the TPLF Junta and address humanitarian needs in the region, he explained. “is 12 and 13 times fold compared to the budget allocated by the federal government for each previous fiscal year” he noted. Government fixed roads, electric and communication infrastructures and social institutions in the region, he added.

Regarding perpetrations of the TPLF Junta, the Prime Minister said Humanitarian workers were killed and telecommunication and institutions personnel faced with predicaments from the society in the region.

“No one encouraged the government for its humanitarian and rebuilding efforts. They only thing the government received has been unjust accusations from the people in the region and outside forces.”

The army was fighting with a uniformed and a more coordinated force during the law enforcement period. But after the operation was concluded, things changed and the military faced with protracted insurgencies led by pro- TPLF elements from the community of the region. The major operation didn’t take the government more than 20 days, he said.

The army had been stabbed in the back by many insurgents who looked like civilians with Kalashnikovs and Machetes. The pro-TPLF insurgents opened fire accidentally after they asked for help in guise of helpless civilians. Many soldiers had been massacred by armed civilians of Tigray region.

A group of national army soldiers had been encircled by many insurgents drawn from the people in the region. Some committed suicide after fighting against many with limited bullets and logistics. And some committed suicide without firing any bullet for the sake of civilians.

There were four divisions in Mekelle. They were capable of protecting themselves and the area at large. But, due to previous treasons committed by armed civilians, the army conceived feeling of reprisal. The withdrawal of the army and the unitary ceasefire has become important to avoid threat of retaliation.

There are evidences that witness activities of priests who carried Kalashnikovs and microphones provoking the community to fight against the national army.

Groups of civilians buried armaments in church compounds in the guise of funeral ceremonies.

“Withdrawal of the army and the decision to the unitary ceasefire also gives an opportunity to the community to identify differences between the national army and the Juna and thereby decide what to do next” the Prime Minister said.

The national army took the blame of the TPLF Junta instead of being appreciated for what it has done to protect the community, premier underlined, Abiy underscored.

The federal government which has invested money, time, labor and lives of the troops to spare the people in the region has not got anything in reward. We are not now facing any threat from that region like the previous years.

“We have other businesses at hand to give priority in other parts of the country. Therefore, we have to save our money, workforce and arms for this purpose” he said.

The TPLF Junta force was not in Mekelle when the national army started withdrawing from the city. It was those who were hiding in the city were shouting and dancing as if they declared victory against the national army. The same is true in the case of Adigrat and other towns in the region.

When we started withdrawing from Mekele, many people raised concerns. But the government did it because Mekelle is no more center of gravity. It is now like any place in the country. Mekelle has nothing special that makes it unique from any other places of the country, he stated.

There are many people who felt annoyed due to fabricated narratives of the TPLF Junta through social media outlets. Because, the Junta and its supporters were disseminating information that they destroyed various battalions, divisions of and killed the generals and other military officers.

It was a type of psychological warfare. Journalist have to counter false propaganda from any force like the TPLF Junta. We have to nurture habits of ignoring false propaganda circulating on the social media platform, unless we will contribute to increase of viewers to the post of the enemy when investing time on that.

The Prime Minister further urged journalists to identify and counter false narratives and educate the public on how to filter such disinformation from the truth on the ground.

People of the Horn know that TPLF is putting obstacles in the way of peace:…

People of the Horn know that TPLF is putting obstacles in…