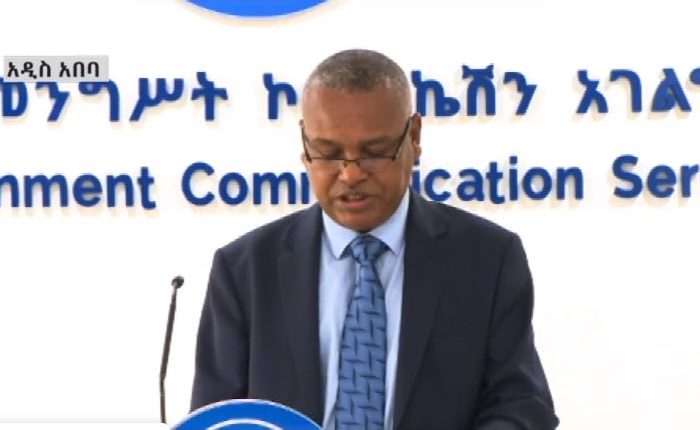 Addis Ababa, June 30, 2022 (FBC) – In a press briefing, Minister of the Government Communications, Legesse Tulu (PhD) stated that historical enemies of Ethiopia have continued their anti-peace activities to destabilize Ethiopia.

The Minister cited the recent horrendous massacre of innocent people in Wollega, Oromia as part of the atrocities being carried out terrorist groups who are being sponsored by historical enemies of the country.

Legesse indicated that joint forces of the National Defence Force, Federal Police and Oromia Special Force have taken military measures on members of the Shene terrorist group who committed the heinous crimes in Gimbi areas of Wollega. The joint forces are also hunting for those who scattered into forests after the law enforcement operation began.

Referring to activities of terrorist organizations, the Minister said the government security forces have fully decimated the rebels who involved in recent violence in Gambella region.

Legesse said the Government has been taking law enforcement measures in Oromia, Benshangul and Amhara Regions to protect the community from insecurity and ensure peace.

Although the Government repeatedly stated its readiness to resolve the situation in the northern part of the country, the terrorist TPLF has continued belligerence and beating drums of war.

He is mobilization people of Tigray for another devastating war thereby disrupt the upcoming agricultural works and cause another round of disaster to the nation.

“The Government along with partners has continued delivering aid to people in need in Tigray. But, the government doesn’t believe that the aid is properly reaching the target people in need. The TPLF is diverting the aid meant of the people to its fighters,” Legesse stated.

Out of the total 7,000 humanitarian trucks reached Mekelle loaded with food and non-food assistance facilitated by the government and dinners, hundreds have not yet returned from the region, Legesse said. Legesse forwarded his assumption that TPLF is using the trucks for military purposes including transportation of fighters and logistics. As part of its anti-peace approach, the TPLF has also recently blocked humanitarian flights bound to Mekelle.

He also noted that the government in partnership with partners has delivered food and non-food humanitarian assistance to people in need in Amhara and Afar Region.