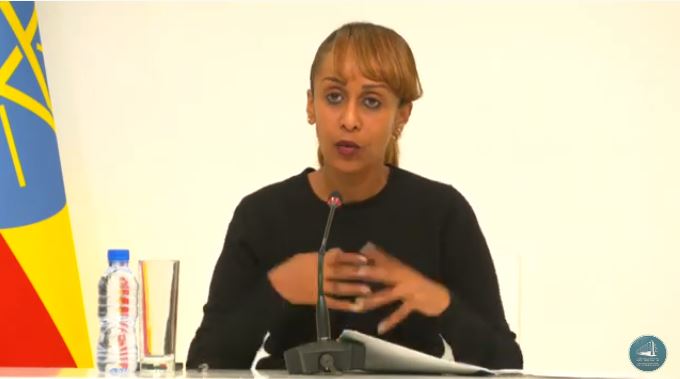 Addis Ababa, June 30, 2022 (FBC) – Press Secretariat of the Office of the Prime Minister, Billene Seyoum has briefed local and internaitnal media on latest developments in Ethiopia including ongoing law enforcement operations being carried out security forces.

Regarding the current peace and security issues with the recent attacks by the Terrorist Shene Group on innocent Ethiopians in Wollega, Oromia, Billene said the Ethiopian Federal Police is currently undertaking investigations for further details on what transpired and how it transpired. Bilene denounced the attack as barbaric and egregious act of terrorism.

No human regardless of the multiple identity groups to which they belong to should be subjected to such inhumane acts, she said.

“In pockets of the Oromia region where OLF-Shene is terrorizing civilians has been under heavy government led operations in the past months, particularly following last week’s attack the Defense Forces reinforced a response operation against OLF Shene the very next day.”

The terrorist attack has been purposefully designed to foment deep divisions between ethnic Oromos and ethnic Amharas that in unity toppled the terrorist TPLF hegemony, she explained.

The terrorist act has been purposely designed and communicated in a manner to anger citizens in Amhara region while victims of the attacks comprise people from various ethnicities.

It has also been purposely designed to anger citizens at a time where the country is leaning straighter towards its development endeavors. There is also undoubtedly a geopolitical underpinning to security threats within the country that are intensified through errand runners locally. The architects of ethnic strife colluding with their foreign masters know which strings to pull in the divisive fabric that they were weaving for the past 28 years.

“It is imperative to place all these incidents within the context of who thrives by creating instability in Ethiopia. While federal and regional forces continue to take measures against OLF-Shene but also their associates propped up through foreign funds to destabilize the region, she said. Those in need of assistance as a direct outcome of these attacks are currently being supported, she stated.

National Security Council had set a direction two months ago to undertake various rule of law enforcement and terrorism countering measures, and therefore the security sector has been working in accordance.

Billene emphasizes that here that peace and security remains a key agenda and priority of the government of Ethiopia. She added that the ruling Prosperity Party executive and central committees had discussed in recent meetings pertains to the peaceful resolution of the conflict in the northern part of the country.

“It is not news that the federal government has been very consistent in promoting peace to any political contestations. The posture of the government prior to the start of the conflict has always been one of peace until it was provoked through the attack on the Northern Command of the National Defense Forces, even though they’re active.”

“Throughout the active combat period, the government has made numerous calls to the TPLF to lay down arms and avoid further bloodshed. So it is with this continued commitment to peace that the ruling party’s executive committee had established another committee to explore the prospects of the peaceful resolution of the conflict.”

So the first factor is that the Ethiopian government and Ethiopia have always preferred to peace, and have been forced into the conflict. This is a conflict that has imposed been imposed on the government. According to Billene, the second factor is that peace is essential for Ethiopia’s political and economic reform initiatives to succeed.

The third factor is the government and Ethiopia would like to put an end to this tragic chapter in Ethiopia’s history and move on forward. Ethiopia aspires to move towards reconstruction, rehabilitation and reconciliation of communities affected by the conflict.

There is a need on behalf of the government to avoid further bloodshed and endless suffering and misery occasioned by the conflict. And the fourth factor is that the government would like to foster a national consensus through national dialogue.

Regarding the principles of the process, Billene said that the first principle clear one is the respect for the constitutional order of Ethiopia. The second one is our fundamental national interests need to be preserved. And then the third one is that the African Union as the facilitator of the process.

Regarding the Green Legacy Initiative, Billene noted that climate change is an enormous global threat and Ethiopia is highly affected with extreme land degradation, droughts, floods, biodiversity loss, and other factors as well.

“On June 21, Prime Minister Abiy Ahmed in the presence of federal and regional government officials, as well as the diplomatic corps launched the fourth green legacy season.”

“This marks the final of the four year national challenge to plant 20 billion seedlings in four years, so just the four year period, but it doesn’t mean that Ethiopia is going to conclude the habit that it has been able, or the culture that it has developed over the past four years.”

One of the key successes of the green legacy initiative has been instrumental in mobilizing millions of people and creating public awareness, thereby leading to significant decline in the rate of deforestation over the past couple of years.

So this is a huge cultural shift in how the population at large is viewing green environment. The proliferation of more than 120,000 Nursery sites throughout the country has enabled job creation for various sections of society. Resultantly over 183,000 permanent and temporary jobs have been created as a direct outcome of the greening and diverse per data received from the Ministry of Agriculture.

And this has generated an estimated 1.3 billion birr income in wages. So you can imagine the impact of these jobs at the household level throughout the country. In addition, and annually, improving survival rates of around 80% is contributing to the creation of new forests.

The focus on high value plants like avocado, papaya, and bamboo contributes towards economic gain and increased commercialization. And as we have seen, avocado exports have been made over the past year.