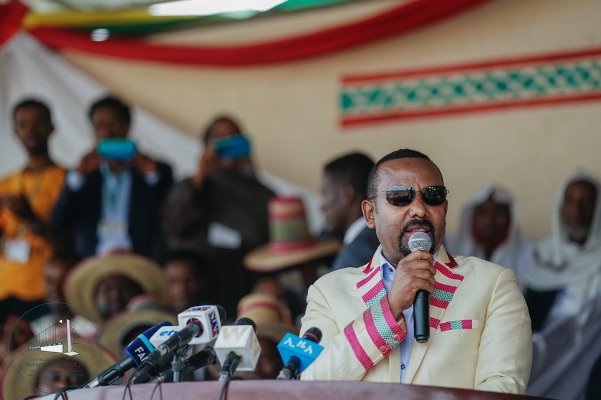 To honor his arrival and in celebration of MEDEMER, the community presented and gifted 120 oxen and 3 camels in a parade.

The Prime Minister recalled the rich historical significance played by the Alaba people in Ethiopia’s past and called upon the zones residents to tap into this heritage in countering emerging challenges to enable Ethiopia’s prosperity.

He affirmed strengthened support of the Federal government to the people of Alaba and encouraged them to forge ahead through hard work, according to office of the Prime Minister.

The Prime Minister also held discussions with community members from the zone following the welcoming ceremony at the stadium.

Requests for asphalt roads, access to water supply, construction of hospitals and other infrastructure requests were raised during the discussions.

Members of the Ministerial delegation provided information with regards to the various efforts being undertaken to address the needs of Halaba zone.

The Prime Minister acknowledged the key issues raised by participants of the discussion and encouraged them to maintain their unity and love as Ethiopia ascends to prosperity.

Earlier, the Prime Minister also addressed the crowd gathered at the Durame Stadium in Kembatta Tembaro zone and held discussion with representatives of the zone.

S.Sudan refutes information circulated as if it gave land to Egypt for military base

S.Sudan refutes information circulated as if it gave land to…