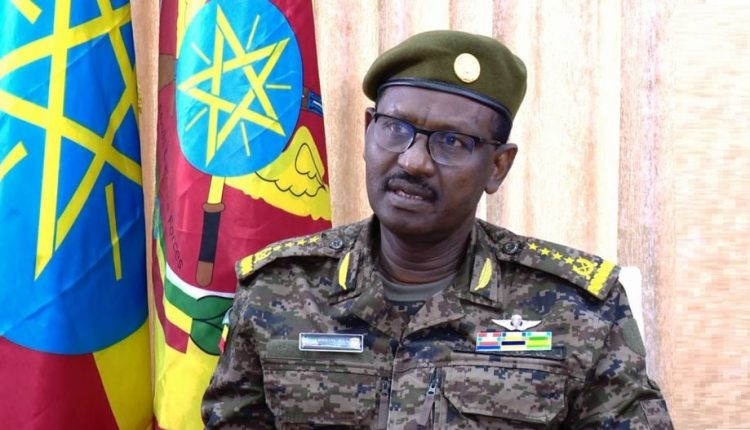 Addis Ababa, January 12, 2022 (FBC) – The rank promotion given to members of the Ethiopian National Defense Force (ENDF) in recognition of their heroic achievement and in reversing the imminent threat on Ethiopia is also a recognition for the people who have been supporting the army at all cost, Field Marshal Berhanu Jula said.

Last week, the government awarded the first Field Marshal rank of the country to the chief of staff of the ENDF, General Berhanu Jula and other ranks to top army officers for reversing the imminent threat Ethiopia has been facing.

In an exclusive interview with ENA, Chief of Staff, Field Marshal Berhanu Jula said in collaboration with other security forces, the gallant ENDF has carried out the heroic operations on the terrorist group to reverse the threat posed on Ethiopia.

Citing that the strong public foundation and leadership leverages have contributed significantly to the army’s victory, he said the collaboration of the terrorist TPLF with foreign enemies to destroy Ethiopia has caused anger to the army and people of Ethiopia in general.

Field Marshal Berhanu further noted that the promotion and award given to the members of the army for their heroic deeds in the fight for Ethiopia’s survival will play a crucial role in generating future heroes/heroines for the country.

The award given to members of the army is also recognition to regional security forces and the people who have been providing all the necessary supports behind the security forces in all fronts, he elaborated.

“They are selected for the ranks and Honor of Medal for their remarkable achievements, heroic acts for 24 hours every day without rest in the war fronts and registering significant impacts. But they have registered these achievements in collaboration with the army they lead. The contribution of each of the soldiers is also included in this accomplishment. The contribution of the general public is also immense for the ranks and Honor of Medal award. The people have struggled by providing support and courage to the army. The courage in return brought about heroes/heroines in the army. The supports rendered by the regional security forces that had participated in the war have also contributed a lot to defeat the enemy at the warfront.”

Noting that the defense force is now in a better shape and readiness to reverse any threat posed on the nation by building its capacity with sophisticated technologies, he said, the ENDF in collaboration with other security forces has cleared the terrorist TPLF from the invaded areas in a short period of time which is a manifestation to the readiness of the army.

Highlighting that the terrorist group had left the invaded areas after being defeated by the army and suffered heavy casualties, Field Marshal Berhanu said using a very tedious and common false propaganda to deceive the people of Tigray and the international community is its inherited manifestation.

“It retreated, following the militants and logistics had been immensely destroyed and devastated; by abandoning its weapons and exposing its forces to danger, including children and elders, who had been deployed to the war front as well as losing its military leaders. However, the group is fabricating to mislead the people in Tigray and the international community by their monotonous propaganda as if they still are strong,” he affirmed.

The terrorist group has repeatedly been shown that it does not care about the people of Tigray as the group is torturing many Tigrayan children and youth, coercing them into to the war which is a clear manifestation of the group’s brutality.

“This group is a colonizer. The intensity of their heinous acts is beyond this. It has no a tiny compassion to its own people. They publicly declared that they use human wave in the war by deploying all the people both armed and unarmed in order to win, with unimaginable loss of lives. They conducted the war with this kind of strategy, forced so many people to perish and face defeat.”

Field Marshal Berhanu said the Defense Forces is a symbol of the unity of all nations, nationalities and peoples and the last stronghold of Ethiopian sovereignty.

“The army is the decisive stronghold of sovereignty. The army has no ethnic sentiment; it is an Ethiopian emblem,” the Field Marshal underscored.