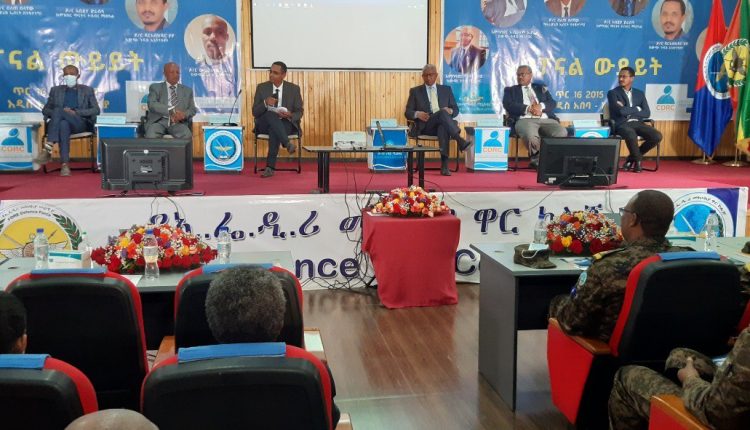 Addis Ababa, January 24, 2022 (FBC) – Senior Government officials and top military officers are attending a discussion aimed at sizing up the impacts of the international security situation on Ethiopia’s security.

In his remarks on the conference, the Head of the Federal Defense War College, Brig.-Gen Bulte Tadese, said that the conference is aimed at fulfilling responsibility of stakeholders in the efforts to portray the current regional and international geopolitics and security issues with research based approach.

Brig.-Gen Bulte Tadese also outlined the importance of the discussion in discharging duties and responsibilities in maintaining peace and security of the nation.

He also stated that Ethiopia has built a national army that is a model for Africa that can quell belligerence from any enemy that drags it into unprovoked war.

He stated that the Defense War College is producing accomplished military leaders who can expertly analysing the volatile regional and global matters and discharging their duties and responsibilities accordingly.

Brig.-Gen Bulti further stressed need to thoroughly analyze the current regional issues to effectively deal with the worsening terrorism and unpredictable regional condition in the region.

Three research papers were presented on the conference under titles: “Egypt and Nile Policy and Strategy”, “The Challenges and Threats of the Geopolitical Rivalry in the Horn of Africa, and the impacts of the Russia-Ukraine conflict on Ethiopia.”

Members of the House of Representatives, General Officers of the Ethiopian National Defense Forces, diplomats, security and intelligence experts and invited guests are participating in the discussion which has been organized by the Defense War College.