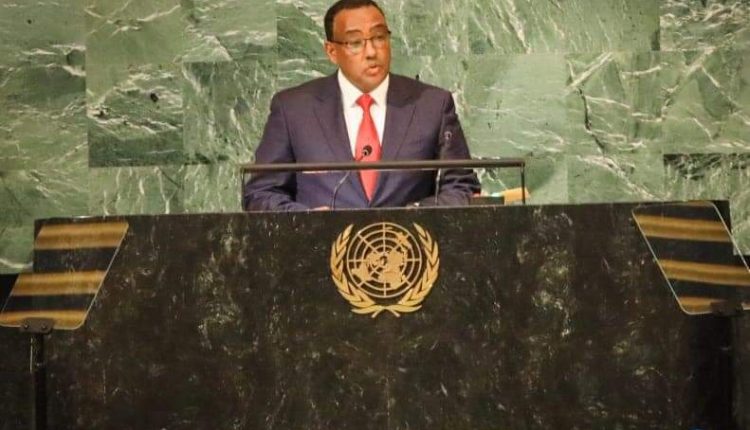 Addis Ababa, September 24, 2022 ( FBC) – Deputy Prime Minister and Foreign Minister Demeke Mekonnen said the Government of Ethiopia earnestly tried to avoid the conflict in the northern part of the country, although efforts to make peace were not successful due to the belligerence of the TPLF.

He said thanks to the resolve and determination of Ethiopians, the designs of our adversaries have been frustrated, adding that Ethiopia paved a path for peace and recovery, relying on the ability of the peace-loving Ethiopians to reconcile and make peace on their own.

He called for support for Ethiopia’s agenda for peace, reconciliation, and reconstruction and urged respect for and support for the AU-led peace process. Any other approach, including the politicization of human rights and unilateral coercive measures, will not yield any outcome, he stressed.

The Deputy Prime Minister and Foreign Minister, made the remarks today (September 24) while addressing the United Nations General Assembly (UNGA77) General Debate, where Heads of State and Government come to address global issues in New York.

Speaking on the GERD, he said the dam is set to light our homes and fulfill our inter-generational aspirations. He further paid gratitude to the people of Ethiopia who paid for this project.

He took the opportunity to underscore Ethiopia’s commitment to equity and cooperation in the use of transboundary rivers and shared prosperity with all riparian countries. He said, “We all continue our good faith trilateral negotiation under the auspices of the African Union to reach a mutually acceptable outcome.”

He highlighted that climate disasters and their insufferable impact are preventable and made an urgent call for all states to translate rhetoric into action. According to Mr. Demeke, states must act on their commitments to decrease emissions, realize their climate finance commitments to mitigate the impact and build resilience.

In concluding his speech, he emphasized the need to scale up international cooperation. He said the gravity of the challenge states face dictates coming together in search of a collective solution. “We need more, not less, multilateralism,” he said, urging countries to continue to uphold the cardinal principles of independence, impartiality, integrity, non-interference, sovereignty, equality, and non-selectivity to maintain a working multilateral system rooted in the Charter of the United Nations.

Global institutions need reform to reflect current realities and be more representative and responsive to the demands of their time, he said citing that Africa has no permanent seat in the UN Security Council. He said, “This has to be rectified for the credibility of the Council on the continent and its full representativeness.”

We have a shared planet and a shared destiny, according to Mr. Demeke, and overcoming our collective challenges requires concerted effort and trusted leadership.